We’ve all heard our fair share of news about kids in schools all over Malaysia succumbing to possession hysteria, requiring school authorities to enlist the local Ustaz to come rid the school of demonic energy. I thought it was something that only happened in rural areas or boarding schools, and that it wasn’t something that would happen in my suburban school in Subang Jaya ⎼ but I thought wrong.

It began when I became a senior; Form 5. Every time it rained or when there was a thunderstorm, a spine-tingling scream would reverberate throughout the school relentlessly until the rain stopped. It turned out to be a girl in a Form 3 class, and according to her classmates, she would start punching things and complaining about being hot when it started raining. She would then fall to the ground and start screaming, her voice full of anguish and suffering. The first time it happened, every single person in that school was scared stiff. Her screams could be heard from every corner of the school compound. Several classmates would huddle into a ball with hands over their ears, trying to block out the desperation in her screams. Since then, it has happened every time the rain falls. It’s happened so often that weirdly enough, students and teachers have gotten used to it. Now, students would just steel themselves ready when dark clouds loomed near, and the teachers’ only response would be “Again?”.

I used to sleep in the bedroom situated at the back of the house. Always felt that something was off about that room. When I was around 11 years old, I had an odd dream about my deceased great-grandmother. She stared right at me and wagged her finger as if to say “no”, but each oscillation became more exaggerated until it no longer seemed human. I woke up in a cold sweat and looked at the alarm clock on my bedside table, which said “3.00am”. Suddenly something at the corner of my room caught my eye. I saw a short figure with white hair and glowing green eyes just staring at me. I got scared and threw the alarm clock at it. I quickly shut my eyes and tried to go back to sleep. The next morning, I wake up to find the alarm clock back on my bedside table, with the batteries removed and placed beside it. I was the first one awake and no one in my family had entered that room that night. – Rin

I’ve got one word for you – Marbles. The sound of marbles rolling down the stairs that haunt me in my own home. First, my family and I thought the kids next door were playing with em but children don’t play marbles at 3 in the morning. Not the ones alive, at least. – Anonymous

I can still remember that chilling hysterical scream from that one night in my boarding school.

Like every other night, after dinner, students from all forms would gather back at their dormitory common room for a night studying session or what we is normally called “night prep”. It serves the purpose of catching up on studies, chilling out with friends or, if you really need it, to just feel like a couch potato.

I recalled walking over to the table my friends occupied close to the window where it faced the hall. It was where some of our school events were held, like prize giving day and Teacher’s day.

Two badminton courts separated the distance between our dorm and the hall itself.

At some point through the night, everyone’s attention was on the hall, drawing whispers, murmurs and hushes from those in the common room.

I turned and noticed the doors of the hall swinging back and forth rapidly, gaining momentum by the seconds. It might have been my imagination but I saw a flash of white pass by one of the doors from inside the hall.

A moment later, a shrill, bloodcurdling scream filled the air. 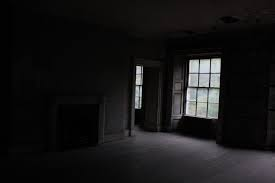 To be honest, I don’t have a lot of creepy experiences to share, and I’m glad I don’t. Because I feel like I might die if I were to encounter any of those bone-chilling, heart-stopping, nightmare-bringing episodes. But hey, it’s spooky season! And a spooky month calls for spooky stories. So, with all the strength I have left in my fragile heart, let me tell you the spookiest one of all: the story of when I developed my fear of the dark.

I used to share a room with my sister, and she would always have me switch off all the lights before going to sleep. “I can’t sleep with the lights on,” she’d tell me. And I didn’t have a problem with it, until the night she moved away, that is. As a habit, I switched off the lights, climbed into bed, and closed my eyes. No matter how much I tried, I couldn’t fall asleep at all. I tried counting the ticks of the clock—tick, tick, tick—but the noise started to irritate me. I tried focusing on my breathing—inhale, exhale, inhale, exhale—but I started to consciously stop breathing and count the seconds to which I could hold my breath. Frustrated, I threw the blanket off of me and went to switch on the lights. But a second after I heard the familiar flick and saw the blink of white light, I heard another one, so eerily close, and the room was back to being pitch black.

I know right—what the heck?

Initially, I thought my lights were broken, but that couldn’t be possible—I clearly heard the second flick, which meant someone must’ve turned them off. And then I thought I must have accidentally flicked the switch twice, so I tried turning on the lights again.

This time, I made sure that I only flicked the switch once.

But the same thing happened.

At that time, I wasn’t scared at all. I was angry. Dear God, I just want to turn on the freaking lights and go to sleep! So with that thought in mind, I tried again.

This time, I was scared. Oh, I was very scared, all right. The repetitive noise of the ticking clock started to blend into one, ear-deafening sound; the once steady inhales and exhales of my breathing started to become unstable, and—

A voice breathed on the back of my neck.

A voice that terrifyingly sounded like my sister, who was hundreds of miles away.

I didn’t know what the phrase “a shiver ran down my spine” felt like until that very moment. It felt like my whole body was frozen on the spot. I didn’t dare look back. What kind of fool would do that when they hear someone whispering behind them even though they’re alone? That only happens in horror movies, and that’s usually when the daft character dies.

At that time, I didn’t even think of what that word could possibly mean. Perhaps it meant “don’t turn on the lights”, or perhaps it didn’t mean anything at all. The only thing I could think of was to get the heck out of there, and when I could finally feel my legs again, I bolted out of my room and knocked on my parents’ door with tears stinging my eyes. When they opened the door, I told them what happened. They didn’t believe me, of course, so I told them to check for themselves. But when they entered my room…

It was completely lit up.

As I’m writing this right now, I’m still not sure whether everything that happened was merely my imagination.

No creepy story, but here’s an excerpt from my (real!) dream diary.

Humans aren’t sealed all the way through, meaning we look somewhat like cut open chicken corpses. Our backs have this giant opening, gaping between our nape and near the bottom of our spine where we can look in and see our internal organs. It’s an ugly scarred hole, our insides seem to be coated in white dust and I’m confused. Have we always looked this way?

The initial disgust gives way to fascination as I watch my own heart expand and contract in a mirror (the mirror works to show me my back rather than my reflection). There’s dark veins full of black goo and I feel a horrible urge to stick my hand through the gap and run my finger over my insides.

As I am looking, a masked creature rises up in the reflection behind me (I don’t quite understand how that works either). It descends, mouth open, on me and my open backed body. The dream changes.

I haven’t experienced one….. Yet.