The next event, ‘BeYOUtiful Photo Exhibition’ was held across two days, on Thursday, 24th May 2018 and Friday 25th May 2018 from 10am to 4pm at Sunway College Boulevard. The event featured different photographs of Sunway University and Sunway College students and staff on both days displayed on a wood pallet. The pictures were not edited for natural looks. The photo exhibition allowed the audience to interact with the students and staff portraits by pasting emojis or sticky note comments to encourage self love and acceptance.

JUST DANCE Competition high scorers from the previous event and the first three winning trios from the online contests were awarded lucrative prizes throughout the day. Info booths were set up on both days in the event of further enquiries by the participants regarding the campaign. The booth also comprised of breaking barriers and selling sticker merchandises. Each of the sticker portrayed different elements of self love with a notion that will help people on the importance of appreciating oneself. The emcees (who were the students themselves) introduced their campaign and welcomed the audience. The emcees highlighted the purpose of the campaign, it’s impact on people these days and suggested that ‘only you matters’.

The Campaign Director, Kelsie Keah expressed her heartfelt gratitude to the organizing team, supervising lecturer, sponsors, facilities, audiences, and others. The Director also highlighted the summary of events for the day. There were also performances held during the event. Calligraphy artist, Eleanor showcased her talent by designing guitar in colour with a notebook as the background and projecting it. Eleanor was a very meticulous artist. Her art could be a customized gift as well. Eleanor was well trained in ecstatic, life size, and illustration based drawings. Ambank and Hush Puppies were some of her projects. On Thursday, 24th May, Amal from Brunei sang and played the guitar. She developed her passion in singing from the age of 15, specialising in country and folk  music. She also learnt a lot from the internet. Amal performed breezy and medium fast numbers, such as Let My Baby Stay by Mac Demario and the song, Tropical Hornbill by 34/35. On the same day, Ivana sang and played the guitar too. Ivana started to sing from the tender age of 15 as a hobby. Her covers are on her Instagram account. The songs she performed included a combination of melody and fast numbers. No One by Aly and AJ and Keep Your Head Up by Andy Grammer were some of the songs Ivana performed. 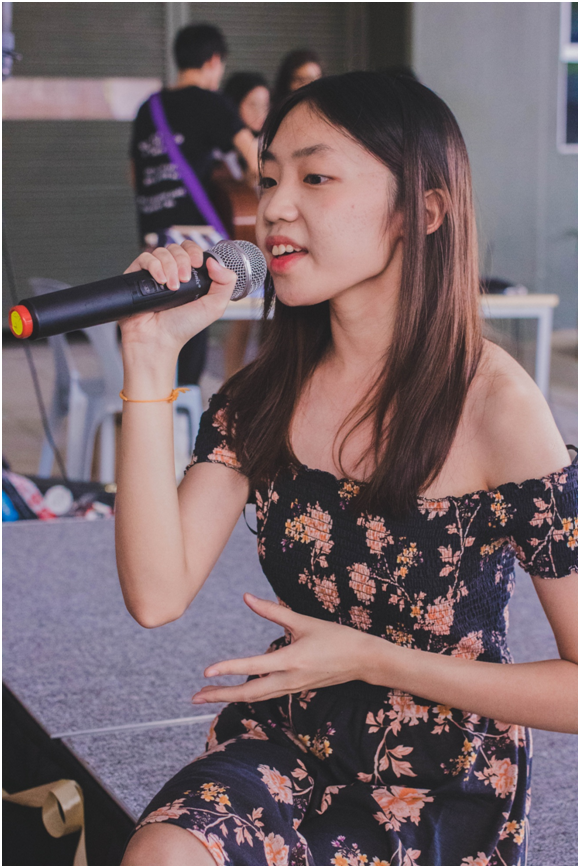 On Friday, 25th May, performances were given by Christian Palencia, Richelle, and Advertising major student, Cheryl. Christian performed the A team by Ed Sheeran and Sunday Morning by Maroon 5 which needs no introduction. Richelle performed Alessie Cara’s debut, Scars To Your Beautiful, Beautiful by Christina Aguilera followed by Cheryl who performed The Climb by Miley Cyrus. Compliment boards encouraged the audience to write what they thought about self love. The members of the audience found the event to be satisfying to the heart and mind. Most of audience enjoyed the photo exhibitions and stated that it was enjoyable as it empowered positive vibes and love. They also felt that the photo exhibition was a voice of self confidence. A lecturer indicated that she was impressed with the effort of displaying portraits from top management staff to the cleaners. Furthermore, the participants also enjoyed breaking the barrier. A student mentioned that it was good for people to overcome problems with self confidence as it breaks the walls of any insecurities they may have. The event were effective, indicating that self love and acceptance is crucial. 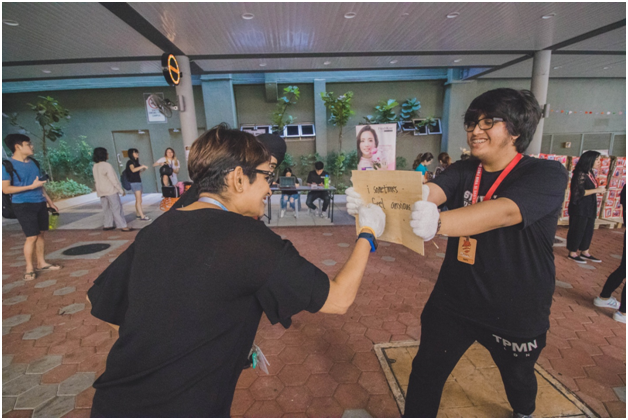