Skip to Content
Home Lifestyle The Hues of Unity in Malaysia

echo Leave a Comment on The Hues of Unity in Malaysia

How often do we as dedicated citizens wonder about the strength of our 61-year-old nation – one that has progressed rapidly in the past decades and made such a mark on this world? Being in my second year of university, celebrating Independence Day and Malaysia Day after a remarkable 14th General Election let out a sudden burst of patriotism within me. What exactly are the achievements of this country, and what is it that we should be proud of before we reap the crops of seeds sown long before our time?

With a highly diversified economic structure, Malaysia has evolved tremendously, with a strong banking sector, low interest rate and a consistently low unemployment rate of 3.3%. Besides that, in light of the new MRT (Mass Rapid Transit) launched last year, one can clearly witness the excellent infrastructure development of Malaysia. From owning the tallest twin buildings to hosting the F1 Grand Prix, Malaysia has come very far from where we humbly began in 1957.

One cannot deny the foundation of stability in our country – the unity we have successfully sustained and maintained over the years. Many countries have gained independence in the past 50 years (Brunei, Qatar and Bangladesh come to mind), but not many have gained independence solely through the unity of an ethnically diverse people. Malaysia is a melting pot of different ethnicities, religions and cultures, and many inhabit the grey area where cultures intersect – Baba Nyonya or Peranakan culture, formed from the union of Chinese and Malay culture is one of the many examples where intersectionality exists in our society.

As young adults pursuing our higher education, having to navigate culturally diverse classrooms and workplaces, have you ever wondered about the unifying factor that brought our people together? As history speaks, we know the country was colonised by the British for a century and many efforts were taken to keep us apart – “divide and conquer”, as they say. My great uncle described the days of colonisation as the days of a society in which the 3 races looked to each other as a threat, kept apart and regionalised. In time these rightful owners of the land knew they had to stand together and prove their worth as leaders of the country without British rule.

So independence was born for the Malay Peninsula, after a battle hard fought on the 31st of August 1957. The efforts our forefathers took in keeping peace, harmony and uniting these races pre- and post-independence were tremendous. We would not be able to benefit from this democracy we call our birthright if it weren’t for leaders like Tunku Abdul Rahman, Tan Cheng Lock and V.T. Sambanthan, who negotiated tirelessly for the establishment of independence; leaders like Tun Tan Siew Sin and Tun Dr Ismail bin Dato’ Abdul Rahman, who pushed forward the effort to unite East and West Malaysia, ultimately leading to the union on the 16th of September 1963 which now marks the birth of our nation as we know it.

This happiness and peace were later haunted by a political misunderstanding, a tragic loss of lives, as an unexpected turn of events led to May 13 1969. We must have (again) heard of, but not experienced, these dreadful days in which our grandparents lived in fear during a nationwide state of emergency. Blood was shed, tensions rose – it ended after  2 months, but its lingering effects were to be remembered for at least the next century. The aftermath of this event led to the rise of Rukun Negara, the de facto Malaysian pledge of allegiance that has taken its place in our ordinary school assemblies, meant to enhance unity and retain peace. May 13 was a nightmare no one wished to repeat.

Recognising unity as a pillar of Malaysian stability, since then, various efforts have been taken to keep it in place by the government – some of which we might be unfamiliar with as 90’s kids, removed from all the chaos. The country is strong when the people are united and weak when they fall apart. This reality was long realised by the leaders of Malaysia. Among these efforts were the New Economic Policy, National Cultural Policy, National Language Policy and the creation of the Department of National Unity and Community Development.

Malaysia has evolved so much since to an extent not many of us have realised due to how assimilated we are within the Malaysian culture. Every little thing shows the hidden unity among us, clearly shown by words like ‘macha’ transforming from its original meaning of brother-in-law in Indian culture, to a term we use to call every friend of ours despite race and colour. From the ‘ang pau’ presented during Chinese New Year transcending as a culture practiced by all Malaysian during Hari Raya, Deepavali and Chinese New Year. The culture of the eating ‘kuih muih’ every other time of the day after work or classes. Don’t we all run to the ‘Pasar Ramadan’ right after work or class to grab all the delicious local delicacies?

We have adopted each other’s cultures, shared each other’s knowledge – knowledge which has been passed down for generations, and come far beyond the tiny nation we were 60 years ago. We truly are a country like no other, as no other country shares our same cultural richness. Variety exists in cuisine, clothing, fashion, language and so many other areas without limits, a privilege most communities in the world lack.

Malaysians have transcended the countries of origin our ancestors hailed from hundreds of years ago. Our language, slang and accent is unique on its own. As quoted by a Malaysian, Jeet Thurai, ‘Where else in the world can you string a perfectly legible sentence together using four different languages? “Wei Macha, you want to makan here or tapau’. The country has gained an originality on its own in time. 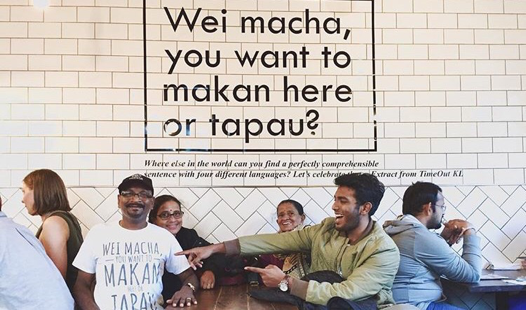 So let us put the act of racial discrimination to shame and rise as one. Malaysian and Malaysian alone. We might arrive from different backgrounds and walks of life, but let no difference define us and no categorisation separate us. We shall be known for the ability to have retained not only peace but love for one another, for the ability to have let our diversity strengthen instead of divide us. Let us succeed in building a better society every day and a more successful economy together. Let us remember the bloodshed of our forefathers in providing us the freedom we are fortunate to have. Let us have no preferences for ethnicity, religion or background as, in the end, remember: all bloodshed shares the same colour.

A very happy Independence Day and a very happy Malaysia Day to every soul born in this multicultural, exquisite land.