echo Leave a Comment on e-Cup of Coffee with Dr. Elizabeth Lee 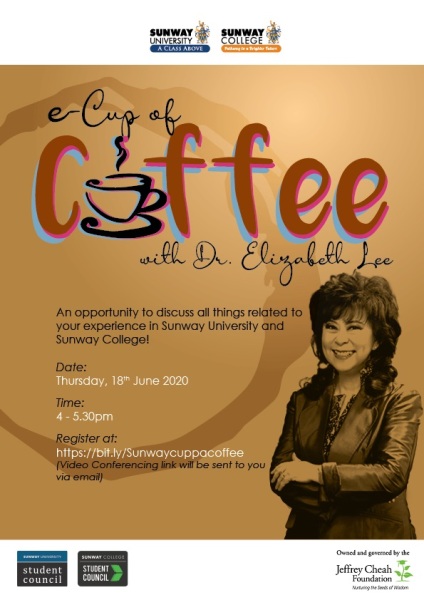 Due to the rise of the recent pandemic along with strict rules and regulations from the government to stay at home, most of the events happening in Sunway Campus, unfortunately, had to be canceled or postponed. However, the pandemic didn’t stop Sunway from being the #MostHappeningCampus! Thanks to the advancement of technology, students and staff in Sunway had the chance to hear from Dr. Elizabeth Lee at Sunway’s first-ever e-Cup of Coffee with Dr. Elizabeth Lee on 18th June 2020 (Thursday). The session was held from 4.00 PM – 5.30 PM via Microsoft Teams with the goal of discussing all things related to the students’ and staff’s experience at Sunway University and Sunway College with Dr. Elizabeth.

The event was split into two sections, responding to the questions asked by participants previously in the online registration form and an open Q&A session where participants are allowed to enquire by typing in the chatbox. Once the house rules were explained, the session began with Mr. Alvin asking how the past 3 months of MCO have been for Dr. Lee.  She explained that at the beginning, it was difficult to cope with the MCO, having to stay at home and not meeting friends and colleagues in person as she was used to. At the same time, working online was particularly difficult and hard to adjust to since she didn’t have a laptop, so she had to work with her phone. Remember the Sunway Education Group Health Advisories on COVID-19 (Novel Coronavirus)? Dr. Lee hand-typed them on her phone!

Dr. Lee went on and explained that the most difficult thing to deal with since the pandemic was dealing with its uncertainty. When the government announced the MCO, there was A LOT to be done. The international students needed passports and renewed visas to get back to their home countries, lecturers needed to come back to Sunway to retrieve their notes left on campus. The campus was so much a part of everyone that it was tough not being able to return to campus as usual. Not only that, but she also had to scramble her head answering all of her student’s questions since Sunway has to wait for the SOPs from the government and can’t take prompt actions or make immediate decisions. Hence, she could only translate to her students all the information she has been given by the government.

One important memory for Dr. Lee was the night before MCO. The government had announced for students to leave the accommodation and return to their respective homes. Sunway Education Group was caught off guard and unaware. In the end, Dr. Lee had to make a tough decision to keep the students on campus and not let them leave the accommodation because sending them back out there would just be like “throwing out our kids”. She held strong to her decision as she believed that it wasn’t the right thing to do sending off the students into the disordered world. Clearly, it hasn’t been easy for Dr. Lee to be faced with this sudden pandemic along with its uncertainty.

The next question asked by Mr. Alvin was how Dr. Lee viewed the education sector in the next 5 years. She believes that it would be difficult to go back to the old norms since the vaccine for C0VID-19 still hasn’t been found. Hence, taking care of personal hygiene, practicing social distancing, and wearing facial masks have become the new norms and will remain for years to come. Besides that, Dr. Lee mentioned that everyone has been anticipating industrial revolution 4.0 where the world will become more digitized, but the digitalized world has arrived. Everyone is now thrown into this realm and have to thrive in this digital reality.

After that, Mr. Alvin brought up the Sustainable Development Goals which sparked Dr. Lee’s interests. He asked about Dr. Lee’s opinion on how the goals have been affected by COVID-19. Dr. Lee stated that on one hand, mother earth has healed greatly because there’s lesser human activity to cause pollution. However, at the same time, the world has been using a lot more plastic ware. For example, Starbucks refuses to let their customers use their own tumblers. Due to this, Dr. Lee has been recycling even more and her example should be followed. The harsh fact is that everyone has been using more masks and throwing it all away, all over the place. When most of them are not recycled or properly disposed of, this increases pollution in oceans and on land. Therefore, she “doesn’t know if we’re going forward or backward” because it is important in subscribing to achieve these sustainable development goals, but at the same time, the student and staff’s safety is also a priority. The struggle was to find a balance between the two.

Along those lines, Dr. Lee also mentioned the personal protective equipment (PPE). She was shocked at how often medical frontliners have to change their PPEs for every patient which isn’t really practical. Hence, this problem sparked an idea from Sunway Medical Centre and Sunway iLabs to build a contactless COVID-19 testing pod, allowing healthcare workers in Malaysia to conduct testing for suspected cases in a safer and more efficient manner.

From this, Dr. Lee reminded everyone in the session that what applies today doesn’t apply anymore tomorrow. Thus, she encouraged every participant to keep abreast with new information and keep innovating to deal with this current situation.

Having answered the general questions, it was time to answer the questions from the online registration form. A student asked about the short term plans for students when the campus reopens. Dr. Lee understood her student’s concern and advised everyone to keep themselves abreast with what’s currently going on. She also mentioned how a series of advisories have been handed out to students already. She was pleased to hear about how the Philanthropy Office and Student Life had set up a student fund for students living nearby.

Another student asked when would all the students be able to return to campus. Dr. Lee wished that “they could all come back today”, however, the authorities have really staggered the return of students. So far, all research students have come back. First-year students can come back in July. Second and third-year students will have to wait. They’ll try to get the culinary/language/science students to come back as soon as possible. She also mentioned that second-year students may be able to come back to campus earlier than the end of the year.

However, all the on-campus facilities, such as the library and ATM, are all operating.

The last question asked by a student was that if there’d be a mixed structure of online learning. Dr. Lee explained how they are discussing a dual-mode(blended learning) – consisting of face to face classes and online learning. They’ve also been taking advice from doctors from the Medical Centre about the virus since January.

She stressed on the fact that as long as you wash your hands constantly, and take care of your hygiene, it’s difficult to contract COVID-19, even if you’re sitting next to someone with the virus.

Next up, the president of Sunway University Student Council, Givaythaa Ganisen, also asked a few questions pertaining to their structure of grading and how it’ll affect their CGPA. The Vice-Chancellor, Professor Graeme Wilkinson, was also on call and answered by telling everyone that they realised a lot of students weren’t used to online learning. Thus, they adopted a pass/fail scheme, where if the students met the basic requirements, they automatically passed. However, this scheme is neutral and won’t affect their current CGPA. The university will not be commencing classes in July, but hopefully will be conducting some classes in August, for the next semester.

Another burning question that students had, was whether there’d be any fees reduction. Dr. Lee continued to say how online learning has suffered a stigma for “being cheaper”, which isn’t the case. Online education isn’t cheap. They had to buy laptops for all the staff. Logistics aren’t going as smoothly as they wanted. She understands the point of view of the students and parents for wanting a reduction in fees, but at the same time she has to look out for her staff. The Malaysian Association for private colleges and universities strictly stated that there are to be no fee reductions.

Questions by the College’s Student Council were asked next. The president of the council, Tay Ji Anne, enquired on how they were supposed to go about promoting the clubs and societies, since everything has been put on halt. Dr. Lee reminded everyone that “we just have to take it one step at a time”, as the situation changes every day.

The last question the president asked was what are the safety precautions that have been put in place for the use of the on-campus facilities? Dr. Lee mentioned that social distancing measures have been put in place. For example, the lifts – only a certain number of people can be in them. They are also exploring “partitions in canteens.”

The last session of this meeting was the Live Q&A. Helmi, a student part of the Sunway University Biology Society, asked if students could purchase hand sanitizers on campus. Dr. Lee stated that they’re trying to make it available at the Sunway Originals Store for a small fee.

The last question asked was what advice Dr. Lee had for students trying to cope with the new normal, whilst still retaining the rich experience of Sunway. Dr. Lee said to make friends. To be that friend that reaches out (she continues by giving a little anecdote about how she received a box of cakes from an old lady, with a note that said “thank you for being with me during the MCO.”).

She ended by telling the students that “we never know whose heart we’ll touch” and “we’re all human beings, make good friends, but start by being a good friend yourself.”

With that, the meeting came to an end, as Dr. Lee had to attend another meeting. She thanked everyone for joining and logged off.