Skip to Content
Home Events Sunway From Zero to Hero

echo Leave a Comment on From Zero to Hero

On Thursday, the 29th of March 2018, Sahabat’s completely new 2018 committee debuted with their first event, Sahabat Forum: From Zero to Hero! Sahabat Society is Sunway’s only Malay Culture Society and their mission is to display and expose students to the rich Malay culture that many of us now overlook. The event was a forum on young entrepreneurship, with the goal of addressing problems students face when joining the business world. The panelists were Mr Syed Ahmad, founder of Sass Gadget and Miss Ain Nadya, founder of Adania. The event was a success with over 150 participants attending and all goals being achieved.

At 7pm, registration opened. Miss Ain Nadya was kind enough to provide the event with a machine used to carry out free facial analysis and as predicted, participants flocked to the display of her facial cleansing products. Food and tickets for the lucky draw were distributed as well as vouchers from the event’s sponsor, GamesFusion. By 8pm, all participants were allowed into the hall and the event started as scheduled at 8.30pm sharp.

After a brief but energetic event officialisation by Mr Fudzail from the Sunway TES office, the event began. When asked about their backgrounds and how they stepped into the business world, both panelists had very different answers. Mr Syed Ahmad who is only 21 and already a founder and CEO explained how he started with barely any capital and until now, only carries out operations through the use of social media. Despite having to live through times where he needed to walk 7km just to make it to class through rain or shine, he kept up with a fighting spirit and now has a profitable business with a full team of employees up and running.

Miss Ain Nadya, 29, spoke of how while growing up she would help her mother give massages and facials to clients in the backroom of their house. After quitting law, her father did not support her decision to start a business and Miss Ain spent a year doing odd jobs such as selling top-ups and waiting tables before she gathered the first RM5000 she needed to convince her friends to also contribute for her capital. Once she had gathered enough, she found a shop lot and converted half of it into a spa and the other half into a laundromat. Within a few months, the spa business was booming but the laundromat not so much. She then applied for a loan and has been expanding ever since. She took the initiative to go for courses on creating cleansers and hand-mixed her own products to use on clients, resulting in clearer skin for them. Her products now retail at Parksons, Metrojaya, Fashion Valet and many more stores. 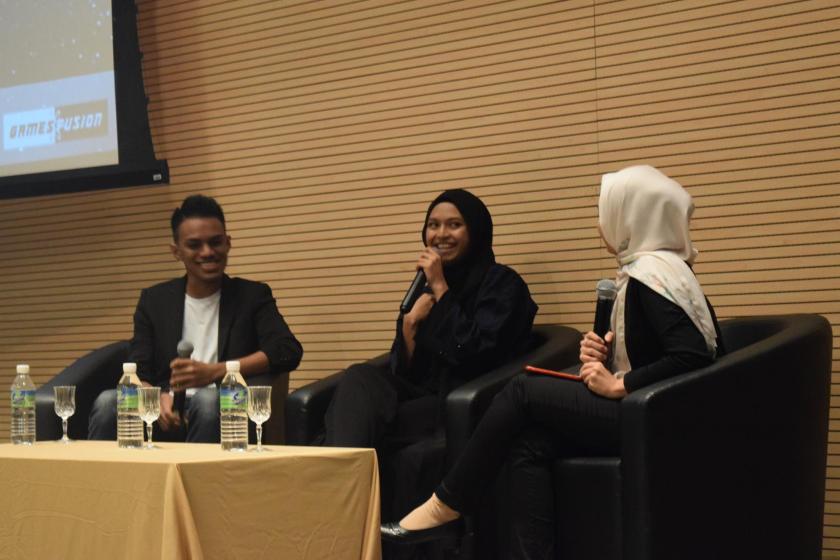 Some of the advice given include having perseverance even when everything seems to be going wrong. Both panelists had stories of how all their staff quit on them, payments became due when they didn’t have the cash flow and how they had no money to use for their own upkeep. Mr Syed shared a special secret on how to use Instagram story polling to our advantage. The most profound lesson was to not try selling our own products until we had succeeded in selling other already established products. Miss Ain also shared on how she balances her family life with work.

The event ended with a lucky draw and special performance from Instagram star, Shalma Eliana. Feedback forms indicate that participants gained a lot of knowledge from the event and feel more confident now in pursuing business than they did before. Personally, having two locals on stage who both came from nothing, as opposed to the more prominent CEOs we see on social media who come from wealthy backgrounds, was an uplifting experience. I got to see what kind of person you need to be to make it in the business world. Energetic, optimistic, rational, fearless, determined and eloquent come to mind when I think of the panelists. In conclusion, although there were some minor hiccups, the forum was a definite success.