echo Leave a Comment on Sunway’s Got Talent S3: Symphony of Forte’

Adorned with tons of black and gold decorations, from a golden star-plated red carpet walkway to a realistically lifelike figurine, the Jeffrey Cheah Hall where Sunway’s Got Talent (SGT) Season 3 was held on Tuesday night, the 9th of April 2019 was almost unrecognizable.

Lively music boomed as the crowd flooded the halls holding goodie bags in one hand and pictures from the SGT photobooth in the other. Staying true to their theme, The Oscars: A Symphony of Forte, a grand ambience hung over the hall with sharply dressed emcees and an impressive judge line-up that include Ms Juwita Suwito, a coach for Season 1 of American Idol, lead vocalist of the renowned Malaysian pop band Paperplane Pursuit, Mr. John O, Sunway University’s very own Dr. Mayco Axel from the Department of Performance and Media and Ms. Puteri Aisya Marissa, an Astro Battleground Champion and long-time dancer.

After a clever reminder of the house rules by the SGT team’s very own “Siri”, Dr. Elizabeth Lee was invited on stage to mark the official launch of the event by popping open a huge gift box that revealed a gorgeous golden figurine surrounded by floating balloons.

This was followed by a grand opening performance. “3 words”, said the emcee. “SGT. Season. Winners!” The reigning champions of SGT Season 2, HardBeat brought life to the stage, and put on a seamless beatboxing segment that left the crowd both cheering and speechless at the same time.

The first performer was announced shortly after, and SGT Season 3 was in full swing! Performing an original song, produced and written “all by [her]”, was Marsha. She had incredibly strong vocals as her passion radiated and echoed throughout the hall with an unforgettable stage presence as her song was accompanied by intense facial expressions that reflected her emotions.

Following up was another strong contender, a group of 5 dancers who go by the name “5 Rings”. A fair warning: Do not let their adorable stances and cute demeanour fool you, these girls were all out sexy, sassy and saucy as they performed to Iggy Azalea’s Sally Walker. Starting off with immense energy and a powerful bang, 5 rings made the audience want to get up and jam too! They were definitely a crowd favourite, with non-stop cheering and applause from the audience as they performed immaculate dance moves.

Next up was the duet “Connection”, a singer and keyboard player who performed Shallow. The emcees gleefully crowned them “Sunway’s very own Lady Gaga and Bradley Cooper!” Both performers gelled beautifully with one another as the music from the keyboard added essence to the singer’s strong, powerhouse of a voice. Duets are one of the most challenging acts but this duo managed to amalgamate and produce astounding talent that left the crowd whistling and screaming at the end.

Bryan Wu took over the stage next, with his stunning freestyle dance moves that hooked everyone’s eyes to the stage. He performed all sorts of impressive stunts from headstands to backflips. His flexibility in his dance moves really showcased his incredible talent. Taking things a step further, he even jumped down from the stage to show off some skills too crazy to be contained to the stage! His energy and incredible stage presence was definitely worthy of the roaring applause he drew from the crowd.

Next was a performance from Cassandra Foo, also a contestant from the previous season of Sunway’s Got Talent. However, this time she was not merely singing but she brought a completely new flavour to the night with an opera performance! Cassandra’s high notes and her ability to manipulate her voice up and down in a suitably opera-like way was enough to transport audiences from Sunway’s Got Talent to a beautiful orchestra hall instead. Her presence in the middle of the stage as she sang, mimicked an oscar statue and her charming personality on the stage definitely was a plus!

Following these performances was a key moment that the audiences were excited for; the lucky draw! The attractive prizes had the audience praying it would be their lucky night. The prizes for this round were tickets to Lotte World in Seoul, Universal Studios or Disneyland Hong Kong! The emcees noted that even if the audiences were not lucky enough to win a free ride, they still had the goodie bags which consisted of vouchers from Sunway’s Got Talent sponsors as a consolation.

Next was a rather unique contestant; Inferno, a group that performs the 24 Festive Drum which is a traditional art born from Malaysia! Living up to their name, this group’s ways of beating the drums brought out fire in everyone that night. Everyone’s spirits were lit up with the loud sounds of the drum. The performance was on par with opening ceremony performances for The Olympics and the audiences cheered back with all their hearts after watching this pumped up performance.

Ch’ng Junn Ying came next, showing off her high power voice as she a sang cover of ‘If I Were A Boy’ by Beyonce. Her performance overall was fun, enjoyable and full of swagger.

The performer that came after was Kenneth Tan, who managed to make the audience gasp at how he was just 16 years old! He mentioned that he took inspiration from Michael Jackson in the beginning, and it really showed in his performance. He did freestyle dancing followed with an up and down beat, which felt like a bouncy ballad. His dance was anything but monotonous, it matched the rhythm of the song and he used up the whole stage to dance all his talent away.

After singing and dancing performances, two duet actors finally made an appearance; Arjun and Cheah. The beginning of their acting was already intense enough to grasp the attention the entire JC Hall. They opened by letting the audience know the skit would be about a school shooting. The short act followed an interview with a school shooter. Not only were they able to tell the heart-wrenching story in a short amount of time, they were also able to create the powerful atmosphere with their own shooting sounds by using their own voices! The shooter in the story ended the act by saying “you will not like me, but you will never forget about me”. The story definitely sent chills down everybody’s spines that night!

Finally, the last performer, Yee Heng Zeh made an appearance with another dance performance! The beginning of his performance gave an ethereal atmosphere, followed by his ballet style dancing that came with numerous ballet dancing jumps. His smooth movements on the stage along with his flexible yoga-like body following the classical music note soothed the audience’s hearts. 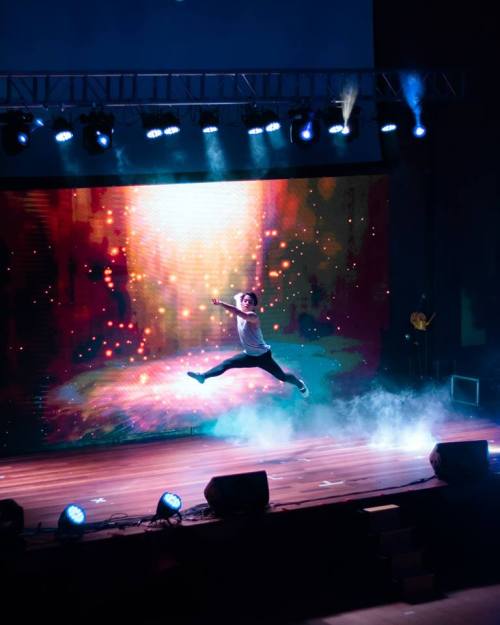 What made this season of Sunway Got Talent different from last year is this time, the selected performers were given the chance to have a second performance in order to win the audience’s votes. The top five runner ups were Kenneth Tan, Cassandra Foo, Arjun and Cheah, Inferno and last but not least, Bryan Wu. The second round was the time to show off their talents further so they could win the title of Sunway Got Talent’s Season 3’s champion.

The School Of Arts Band performed on the stage as a break before the contestants once again took over the stage. The energetic band did a cover of ‘There’s Nothing Holdin’ Me Back’ by Shawn Mendes and ‘24K Magic’ by Bruno Mars.

The contestants were finally ready for their last performance of the night, and that was their last chance to win as many votes as possible from the audience. The first one to go was Kenneth Tan. This time, his dance was slower than his previous one, and he danced freely to a chill Korean song. How dreamy! He said that he put together the choreography all by himself, and it took only a few hours to prepare his stunning dance moves.

Inferno took over the stage for the second time and this time with an even more fierce spirit, ready to burn everyone’s hearts. Their performance this time was somehow more superb, more skilled and the most amazing part was how they were able to match each other’s beating rhythm even more this time! Their glowing drumsticks lit their performance even more. The way they were able to synchronize their movements and how they were able to set up their drums really deserved the loud applause that rocked JC Hall. They revealed that it took them more than one month to practice, and the applause definitely meant a lot to them.

The playful and charming Cassandra Foo was all set to entertain the audiences with her opera singing, and this time it was livelier and lovelier than the last one. The cute hearts displayed on her background as she sang her melodious voice playfully made the audience think they were in a Disney movie, starring Cassandra Foo as the princess. Her voice resonated to the soul, and the audiences had a joyful time hearing her sing.

The audiences were ready for the next act by Arjun and Cheah. The emcee warned the audiences how the performance had a sensitive theme, and oh boy, it definitely was. At first they set up the suspense between a couple, in which one of them invited the other’s dad and the other suddenly got anxious and wanted to run away. After he insisted on why he refused to see his dad, the other guy screamed out on how he was raped before. After the confession, they both heard the ringing bell, possibly his father’s, and the act ended on that chilling note. Their act made the audience speechless, then followed by cheers by everyone after they have been moved by the duo’s act.

The last performer of the night was Bryan Woo, who this time was dancing with more props and a classic/romantic theme. The dance was accompanied with a bit of acting, and the overall performance was a lovely one.

After another lucky draw, it was finally time to reveal the performer with the most votes and who would bring home the title of SGT S3 champion! First, they handed the consolation prizes to the other performers; Connection, Marsha, Yee Heng Zeh and Ch’ng Junn Ying in the form of cash vouchers. Then the emcee revealed the contestant who won the popularity award was Inferno.

The heart-thumping moment finally came, and the top five winners were gradually revealed. The fifth place went to Bryan Wu, the one who performed us his lovely classic dance. Fourth place went to the genius acting duo with thought-provoking short plays, Arjun and Cheah. The second runner up went to the talented opera singer Cassandra Foo. The first runner-up went to Kenneth Tan, the talented freestyle dancer. The champion of the Sunway Got Talent, and the one who managed to light up the audience’s hearts is obvious by now; Inferno!

Overall, Sunway’s Got Talent Season 3 was definitely an upgrade from the last season, especially in terms of the creativity that went into the Oscar-theme decoration. The audience had a great amount of fun, and now we look forward for the next Sunway’s Got Talent, hoping to see even more talented students from Sunway!