Special thanks to interviewee Philix

On Saturday the 17th of August, Sunway University Choir hosted their 8th annual concert with the theme ‘Classical Revolution’. The concert was held, as per usual, in the Jeffrey Cheah Hall, in Sunway College. The doors opened at 7pm with friends and family of the performers streaming in, filling seats throughout the hall.

At 7.30pm, the emcees to the event introduced themselves, welcoming the audience to the event and explaining the theme. The idea of ‘Classical Revolution’ is to bring the audience on a journey to appreciate classical music that laid the foundations for modern music by introducing new cadences and tempos to the world; and how these classics have circled back into our lives today.

Before the performances could start, some appreciation was shown to the sponsors of the event as their advertisements were broadcasted to the hall.

Finally, it was time for the show to begin. The choir members and piano player, dressed somberly in black, positioned themselves on the stage. The choir not only consisted of Sunway University Choir members, but Lollapalooza Singers who are another choir with many accomplishments under their belt in the professional choir performing world.

The entire first half of the concert consisted of Gabriel Faure’s great Requiem and his Cantique De Jean Racine. The Requiem is quite literally a Catholic mass for the dead, mass in this context meaning religious service.The entirety of the Requiem  was in Latin, and the Cantique was in French, meaning that the choir members not only had to learn notes, but also how to pronounce the words from a completely different language.

Of course, they pulled it off beautifully, the harmonies of the different voice parts complementing the simple piano melody, as the pieces blended from one movement to the next. All in all, there were 7 movements with each movement shifting key and containing a different prayer for the dead. For example, the 4th movement, Pie Jesu asks Jesus for everlasting rest. 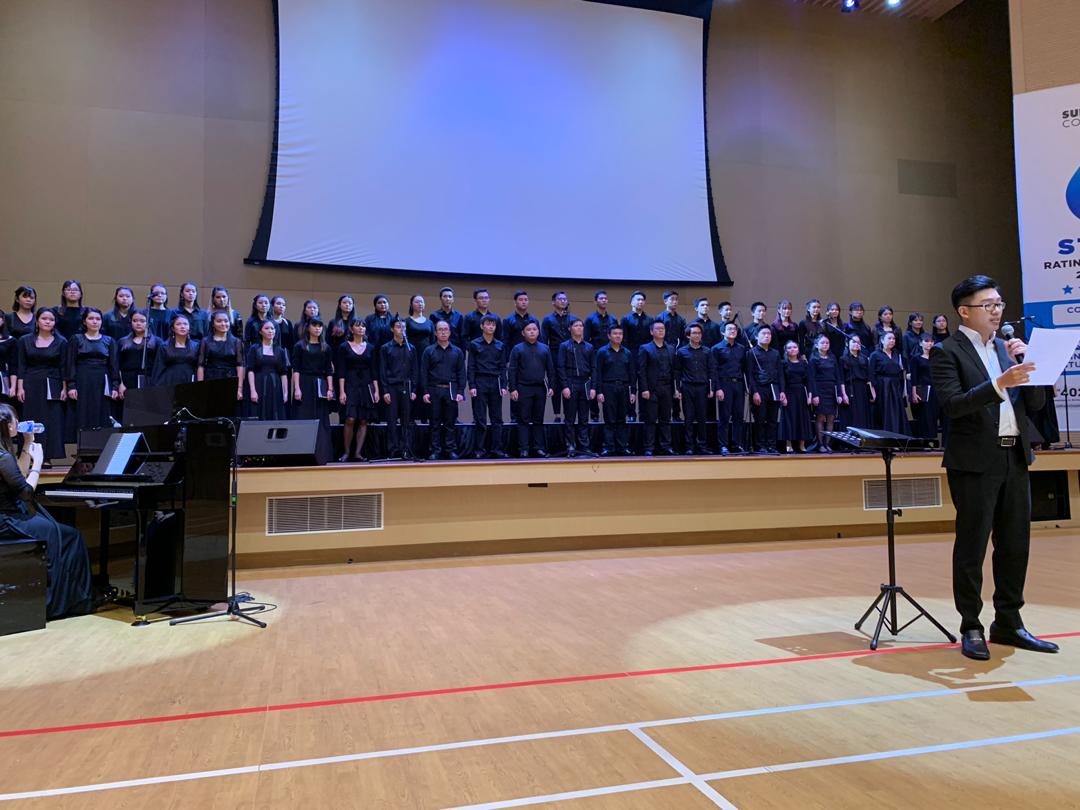 The first song of the next set was Love’s Philosophy, which was Lord Byron’s poem She Walks in Beauty set to music.. Short and sweet, the song is an ode to a woman’s beauty and sweet inner character. . Next was Michael Jackson’s hit, all the way back from 1983, Billie Jean. This was a challenging song for the choir as the tempo was much faster than the previous songs. The  varied vocal parts made the disco track quite interesting to listen to.

Next was a tribute to all the movie buffs, bookworms and general nerds of the audience: Enya’s May It Be from Peter Jackson’s Lord of The Rings. The lyrics of this song are a mixture of English and the fictional language Elvish with phrases like “darkness has come” and “darkness has fallen” repeating throughout the song. Relatable for those with exams coming up!

Following that was The Lady Is A Tramp, a show tune from a 1937 musical that was made popular by Frank Sinatra’s recording. While the title may mislead you into thinking this is an old timer diss track, it is actually an upbeat swing song about living your best life and ignoring the haters. The choir swayed and bounced while singing this, obviously having fun as it brought out the best in their voices.

Second to last was the best performance of the night by far, Warisan, our very own Sudirman’s patriotic Malay-language masterpiece. The opening line to this song translating to “here is where a love is born”. The theme of the song was very fitting as August is well-knows as the month wherein the Malay Peninsula achieved independence from the British. The choir performed this song with patriotic gusto, creating a beautiful echo effect with the chorus being sung repeatedly in overlap. 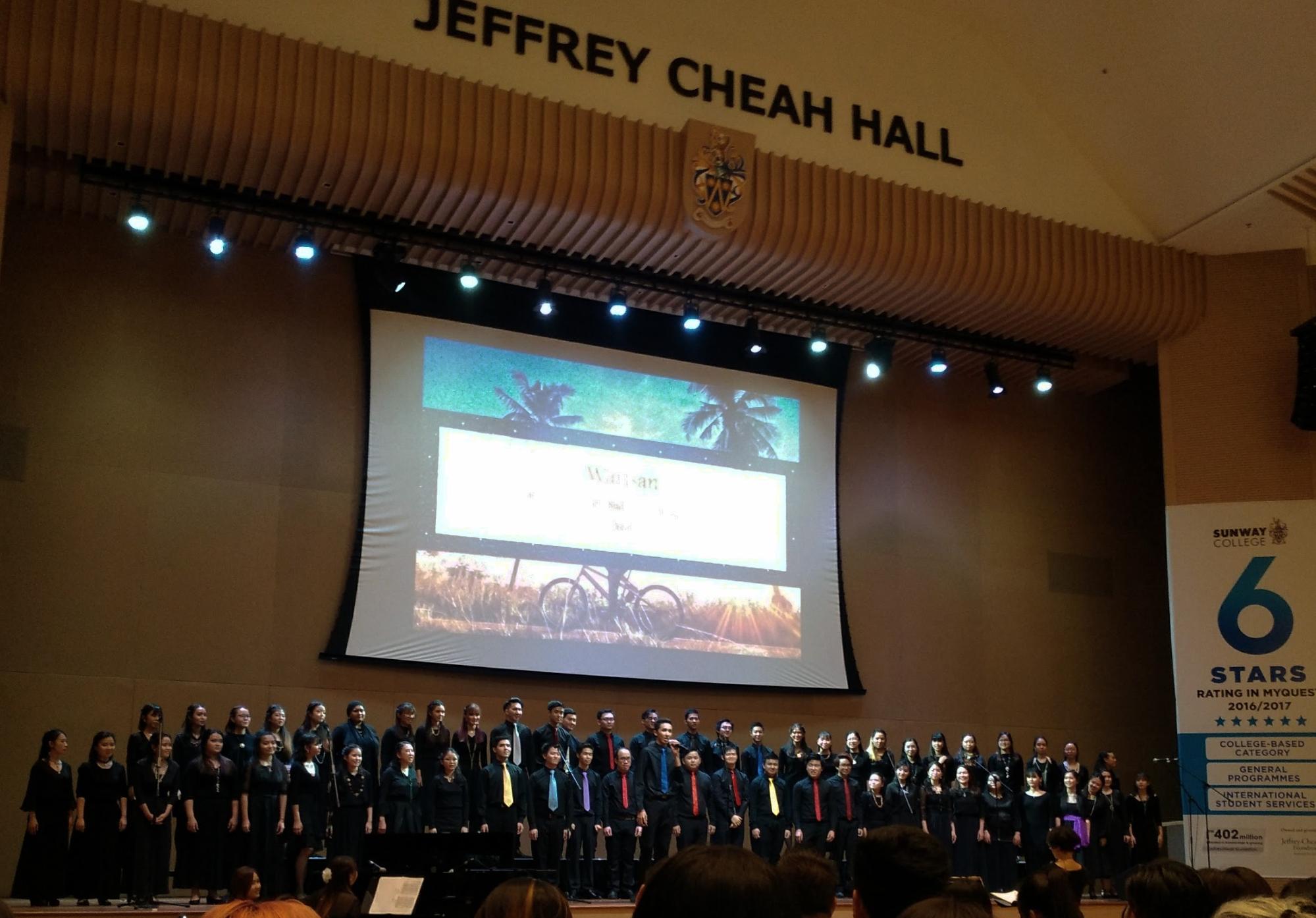 The last song on the repertoire was Queen’s mega hit, Bohemian Rhapsody, the 6 minute long masterpiece containing sections of opera, rock, pop and classical genres. The song, if you’ve heard it, is always fun to see performed live, as the choir had to keep up with several different strains of music and the song becomes a little wacky at times. When the song drew to an end, the audience erupted in cheers and the coach for the choir club, Ms Lai Suk Yin, closed the evening. .

As the choir turned to leave, calls for an encore arose and of course -they obliged, granting us with one last tune to sing along to; the uber-popular Hey Jude by The Beatles. The nostalgic tune had many people grinning and even humming along as the choir gave their all for the closing performance. Once they were done, the event was truly over.

We asked one of the choir members a couple of questions regarding the preparation for this year’s showcase.

Why was the concert arranged in this order?

To provide a contrasting programme for the audience as the first half consisted of classical pieces which can be a little “heavy” for listeners who aren’t used to it. The genres of the music changed constantly (such as the slow romantic piece “Love’s Philosophy” to the upbeat “Billie Jean) so that the audience could experience different musical contrasts.

How are auditions processed? Can anyone join the choir?

Surprisingly, no auditions or experiences are required to join this choir! In fact the ,singers comprise of student, staff and alumni members who come from different academic programmes and backgrounds. Anyone can join as long as they have a passion to sing. Once you join, you just have to do a simple voice test to determine your pitch and section. After the voice test, you will be part of the choir!

How much practice was needed?

They were given the repertoire from the start of the year (7 months ago!) as the programme featured Faure’s Requiem which, as mentioned, is entirely in Latin; as well as the Cantique de Jean Racine which is in French. It took them around 6 months of work to hone the singing tone, language pronunciation and to polish up the performances.

Was it challenging to learn the parts? Was training required to tune everyone’s ears?

It was quite a challenge to learn the parts, especially the foreign language songs. Even the English songs required careful tuning among the different sections to make it sound just right. Ear training was an essential part of choir singing and was a component of the weekly rehearsals. With this year’s concert programme, they had to put in extra time to ensure everything was tuned right, but it paid off

We can conclude that joining the choir is a value for time and money activity. . Not only do members forge friendships and get to be the stars of a beautiful show, they also get professional training to tune their ears and find their voices, all for an annual fee of RM10.

The concert was truly a spectacle to remember and the peek behind the scenes really helps us appreciate all the work and talent that went into putting it together.