Just when you think going for a talk would drain your attention, TED proves you mistaken. Despite it being the first ever TED talk in Sunway University, it was a really worthwhile experience. The TEDx Sunway Club launch was something that motivates you and gets you thinking “What have I been doing all this time?” or quoting the MC of the day,“What have I been doing with my life?”

On a Saturday morning when most people are still lying in bed, the participants have gathered in front of the auditorium located within the new university building. The event started off with a light breakfast. After that, the students made their way to the auditorium where the event commenced. It started off with speech given by the Head Curator of Ted Kuala Lumpur which was then followed by the speech from the Senior Executive Director of Sunway Education Group, Dr. Elizabeth Lee. A little ceremony was held to officialise the launch of the Sunway University’s Tedx Club that morning.

The talks began with Ms. Heidi Quah as the first speaker of the day. Being only twenty years of age this year and still pursuing on her further education, her contribution to the society is really impressive. As the saying goes ‘Never judge a book by its cover’; though nervous as she was on stage, behind her lies the repertoire of her achievements as the founder of Refuge the Refugees [RFTR]. In three years, she has established three schools in Ampang and has helped many refugees in that journey. Her story may wowed and inspired many but little did we know about the mountain of hurdles that she has been through. Through many trials, challenges and sacrifices, the refugees under her care are now successfully living their lives to the fullest.

Next on the podium was another female speaker who also contributed to the society through her charity and she was none other than Ms. Ng Yeen Seen. She is the Chief Operating Officer at the Asian Strategy & Leadership Institute (ASLI) and the Senior Director at the Centre for Public Policy Studies (CPPS). According to Ms. Ng, this NGO started out with literally nothing but their mobile phones. Sounds impossible? Not for this passionate lady.  The flood that struck Kelantan has not only affected the people there but more importantly, it has greatly affected her family. With that determination, she began her project with whatever she has. It was a dark Christmas for those who were living in Kelantan and Ms. Ng did her best to gather doctors, nurses, medics and supplies before rushing to the aids of the victims. Getting donors was never an easy feat but she managed to pull it through to the very end as she was able to get help from Britain! Her efforts have touched many victims and they were really thankful for being able to live through the ordeal.

If you were to think that it is crazy to bring in an artist into a Ted talk, then this speaker will blow your minds. Third on the list was someone none other than a top beatboxer of the nation, Cody Foo, also known as Coex onstage. A talented beatboxer as well as the founder and CEO of BeatNation. Cody entertained the crowd with his beatboxing skills that wowed the audience. His seemingly impossible performance gave life into the gloomy room as the audience cheered and he performed one round after another of beatboxing.  A quote from him that he repeated several times through his session,“Creativity does not exist; only expression does.” Cody emphasized a lot about expressing oneself through the talk.  To Cody, learning how to pick up an art form is the fastest way of expressing oneself with the goal of being equipped in order to become a great artist. He also said that such actions will give the chance for others to express themselves and to sell ideas. Nevertheless, it was really exciting yet unforgettable to be able to witness a beatboxing performance during a TeDx talk.

After hearing three incredible individuals delivered their speeches, who would have guessed that the final speaker was an urologist? A  clinical Associate Professor of Surgery at Monash University, Sunway Campus and a Consultant Urological Surgeon at Gleneagles Intan Medical Centre, Kuala Lumpur, this father of two has studied in three different universities of Britain before coming back to Malaysia. With a really good sense of humour, Dr George Lee’s stories amused, entertained and made his listeners roaring with laughter.  The few experiences he shared with us included his travels in the UK, his near death experience and not to mention his first Ted talk phone call invitation being mistakenly heard as ‘sex talk’. In his talk, he brought about a few kinds of fear:  the fear of the unknown; the fear of change; the fear of death. Having experienced many different things, Dr George lived his life to the fullest as if every day was his last and he even told the audience that every breath he took each morning was a bonus. He even encouraged us to overcome those fears and appreciate what we currently have.

Afterwards, there was the first ever Ted ‘Questions and Answers’ session! Due to the hectic schedule, Ms Heidi Quah had to take her leave after her session and was not present for the session. Questions were directed to the remaining three speakers and all of them answered with really meaningful answers.

Kudos to the team who made this event a success! All of those who were present throughout the event were able to take away something meaningful and precious to them. Dear readers, the next time you think of giving up? Listen to these Ted Talks and they will sure to inspire you one way or another.

A Chat to Inspire

Just as everyone was enjoying the scrumptious lunch after the talk, ECHO was given a chance to ask two of the speakers a few questions 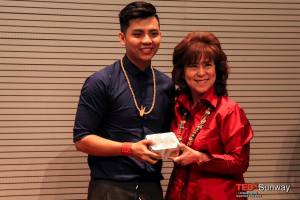 Is there any advice that you would like to give to the students in general or those that wants to pursue the art side of education?

A: First step, you have to convince your parents to give you’re a gap year to figure out what you want. Find out what you’re passionate about doing. Then, you have to find out how you learn. Lastly, be uncomfortable. Explore.

What keeps you going and doing what you’re doing?

A: God. He has been good and I believe that there is a purpose in every pain.

Lastly, a quote that you would like to end this session with?

A: “Be uncomfortable, because being comfortable is the opposite of being productive.” 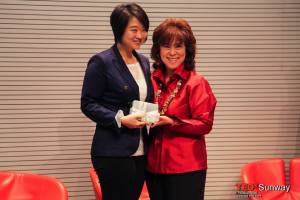 Question 1: What advice would you give to those who want to start out on something new?

A: Firstly, it is important to know your own strengths and limitations. One must know their own capabilities and limitations before taking anything head on. You must also know your surroundings and environments. (Are you the first person to do it? Is it a cliché thing?) For example: Whether it is at a workplace or in school, one must always do research (SWAT Analysis) in order to get to know the ups and downs as well as the current trends.

Secondly, from my own perspective, preparing to face challenges and the unknown is another vital thing. You must always know the resources because it is impossible for things to go smoothly all the time. A plan B must be ready as an alternative. For more insurance, a plan C could also sometimes some into consideration.

Building a good profile is often something crucial to a person. Trust, credibility and confidence are not something that you can buy with cash, they must be earned. It takes time for them to be tested and proofread so that a good platform can be created.

What are the Do’s and Don’ts when starting a charity?

A: The objectives must be clear from the beginning so that a goal or a target can be set. Other than that, you must access the market to get to know what is going on there. You must give a reason for the public to support your course of action. Another thing to take note of is that the charity that you created must be registered. My last point for the question would be to run it with a lot of integrity.

Lastly, what message or quote would you want to leave the readers with?

A: Do not sit and wait for things to happen. One individual may be one small unit but when people come together, great things can happen. Lead the change and be the change that you want to be.

How do you overcome failures?

A: If you give up on yourself, no one will help you. Hence, you have to pick yourself up, hold your head up high and move forward.